Guilt by accusation : the challenge of proving innocence in the age of #MeToo 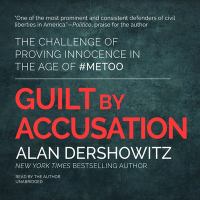 Alan Dershowitz provides an in-depth analysis of the false accusations against him, alongside a full presentation of the exculpatory evidence that proves his account, including emails from his accuser and an admission of his innocence from her lawyer, David Boies. Additionally, he examines current attitudes toward accusations of sexual misconduct, and suggests possible pathways back to a society and legal system in which due process is respected above public opinion and the whims of social media mobs.