The pull of the stars 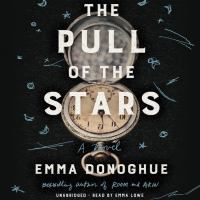 Dublin, 1918: three days in a maternity ward at the height of the Great Flu. A small world of work, risk, death, and unlooked-for love, by the bestselling author of The Wonder and ROOM In an Ireland doubly ravaged by war and disease, Nurse Julia Power works at an understaffed hospital in the city center, where expectant mothers who have fallen sick are quarantined into a separate ward to keep the plague at bay. Into Julia's regimented world step two outsiders, a woman doctor who is a rumored Rebel, and a teenage girl, Bridie, procured by the nuns from their orphanage as an extra set of hands. At first, this Bridie seems unschooled in life, she makes up a bed with only the rubber mat and savors the weak tea and barely edible porridge from the hospital kitchen. But in the intensity of this ward, over three brutal days, Julia and the women come together in unexpected ways.