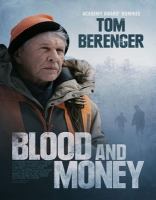 Blu-ray
Scheduled release date: July 7, 2020.
A retired veteran (Berenger) hunting in the Allagash backcountry of Northern Maine who discovers a dead woman with a duffle bag containing a large sum of money. Things spiral out of control when he encounters a group of criminals in search of the money after a botched casino robbery lands them in the middle of the wintery woods while trying to escape to Canada. As they hunt one another over the course of a few days, the stark and frigid landscape frames a test of will and survival where the hunter becomes the hunted.