What you wish for : a novel 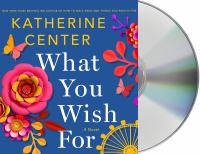 "Samantha Casey loves everything about her job as an elementary school librarian on the sunny, historic island of Galveston, Texas-the goofy kids, the stately Victorian building, the butterfly garden. But when the school suddenly loses its beloved principal, it turns out his replacement will be none other than Duncan Carpenter-a former, unrequited crush of Sam's from many years before. When Duncan shows up as her new boss, though, he's nothing like the sweet teacher she once swooned over. He's become stiff, and humorless, and obsessed with school safety. Now, with Duncan determined to destroy everything Sam loves about her school in the name of security-and turn it into nothing short of a prison-Sam has to stand up for everyone she cares about before the school that's become her home is gone for good"--