The Lost and Found bookshop 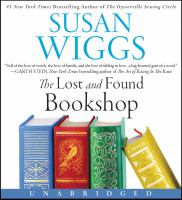 There is a book for everything. Somewhere in the vast Library of the Universe, as Natalie thought of it, there was a book that embodied exactly the things she was worried about. In the wake of a shocking tragedy, Natalie Harper inherits her mother's charming but financially strapped bookshop in San Francisco. She also becomes a caretaker for her ailing grandfather Andrew, her only living relative, not counting her scoundrel father. But the gruff, deeply kind Andrew has begun displaying signs of decline. Natalie thinks it's best to move him to an assisted living facility to ensure the care he needs. To pay for it, she plans to close the bookstore and sell the derelict but valuable building on historic Perdita Street, which is in need of constant fixing. There's only one problem, Grandpa Andrew owns the building and refuses to sell. Natalie adores her grandfather; she'll do whatever it takes to make his final years happy.