Bringing back the island fox 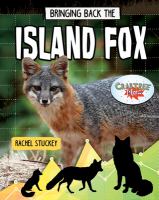 Book
"Less than two decades ago, four Island Fox subspecies faced extinction. Human activities, including pollution and the introduction of invasive species, threw the Channel Islands&#x2019; ecosystem out of balance. Thanks to the concerted efforts of wildlife biologists, government officials, and others, the island fox has made the fastest recovery of any mammal in the history of the Endangered Species Act. This fascinating book traces the events that nearly caused the island fox&#x2019;s demise, and the collaborative efforts that led to recovery of this “comeback kit.”"--