Bringing back the California condor 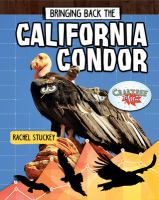 Book
"The California Condor is one of North America's largest birds. These mighty scavengers were nearly wiped out by habitat loss, poaching, and lead poisoning. In 1982, only 22 California Condors remained in the wild! In this engaging book, readers will learn about the captive breeding programs, public education, and other conservation efforts that have led to a small but increasing population of California Condors in the wild."--