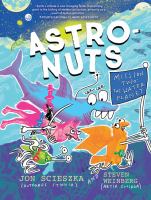 Book
On their second mission to find another habitable planet, the four mutant animals, LaserShark, AstroWolf, SmartHawk, and StinkBug, splash land on the Water Planet, run by some suspiciously friendly clams, who are very eager to swap planets--and if the AstroNuts can stop arguing among themselves they may find out why before it is too late.