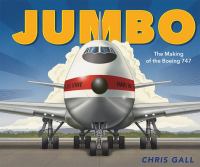 In 1968, the biggest passenger jet the world had ever seen premiered in Everett, Washington. The giant plane was called the Boeing 747, but reporters named it “the Jumbo jet.” There was only one problem. It couldn’t fly. Yet. Jumbo details the story of the world’s first wide body passenger jet, which could hold more people than any other plane at the time and played a pivotal role in allowing middle class families to afford overseas travel. Author and illustrator Chris Gall, himself a licensed pilot, shows how an innovative design, hard work by countless people, and ground-breaking engineering put the Jumbo jet in the air. On January 22, 1970, the Boeing 747 made it's first transatlantic flight, taking passengers from New York to Paris in seven hours.