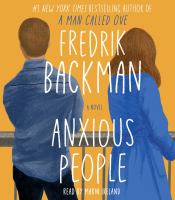 From the number-one New York Times best selling author of A Man Called Ove comes a poignant comedy about a crime that never took place, a would-be bank robber who disappears into thin air, and eight extremely anxious strangers who find they have more in common than they ever imagined.