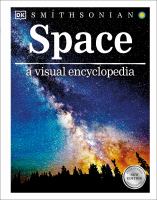 "Space: A Visual Encyclopedia is completely revised and updated for 2020, with new images and information to cover the latest developments in all things space-y. From Space travel and exploration, to the wonders of the Solar System such as the Moon and the Sun, and the mysteries of the Universe such as dark matter and black holes, this book covers all you need to know about the cosmos. The most up-to-date images from space agencies such as NASA and ESA combine with info panels, timelines, interviews, diagrams, and activities you can do at home to help you understand the majesty and wonder of Space. Learn about the Space Race, the Apollo Moon Landings, the Voyager craft that first probed the outer planets and have now left the Solar System, the Hubble telescope, and the International Space Station (ISS)--the state-of-the-art science laboratory orbiting Earth. Discover how to find the constellations and where to look for prominent stars and planets in the night sky, such as Venus and Mars, and how galaxies such as our Milky Way work and were formed. Part of a series of award-winning, best-selling encyclopedias for children, Space: A Visual Encyclopedia is a rocket ride from the beginning of time to the near future, and from planet Earth out to the farthest reaches of the Universe." -- amazon.com.