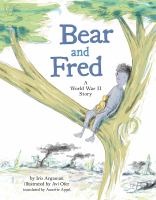 During World War II, Fred must leave his home and live in hiding, apart from the rest of his family, but he always keeps Bear by his side. Bear knows it's his job to take care of Fred and make sure he doesn't feel alone. After the war, Fred and his family are reunited and leave Holland for the United States. And still Bear is with him. When Fred grows up, he and Bear part for the first time when Bear is sent to Yad Vashem, the World Holocaust Remembrance Center. The museum shares Bear with the world to show the power of hope, friendship, and love.