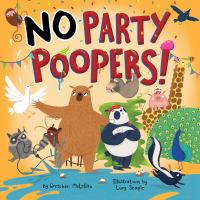 Two bears decide to throw a party, but the stereotypes one has about all of their neighbors leave them with no one to invite.