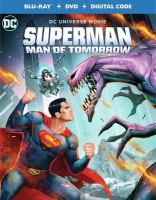 Blu-ray
Meet Clark Kent. Sent to Earth as an infant from the dying planet Krypton, he arrived with as many questions as the number of light-years he traveled. Now a young man, he makes his living in Metropolis as an intern at the Daily Planet, alongside reporter Lois Lane, while secretly wielding his alien powers of flight, super-strength, and x-ray vision in the battle for good. Follow the fledgling hero as he engages in bloody battles with intergalactic bounty hunter Lobo.