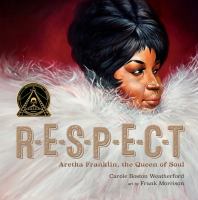 "Aretha Franklin was born to sing. The daughter of a pastor and a gospel singer, her musical talent was clear from her earliest days in her father's Detroit church. Aretha sang with a soaring voice that spanned more than three octaves. Her incredible talent and string of hit songs earned her the title "the Queen of Soul." This Queen was a multi-Grammy winner and the first female inductee to the Rock and Roll Hall of Fame. And there was even more to Aretha than being a singer, songwriter, and pianist: she was an activist, too. Her song "Respect" was an anthem for people fighting for civil rights and women's rights. With words that sing and art that shines, this vibrant portrait of Aretha Franklin pays her the R-E-S-P-E-C-T this Queen of Soul deserves"--