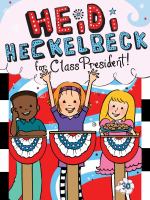 Book
"When Heidi's class needs a new president, Heidi throws her witch's hat into the ring! Now there are so many Heidi needs to do to prepare for the election. She has to make posters. She has to give a speech. And hopefully along the way she will figure out what being class president really means. Does Heidi have the magic it takes to win the vote?"--