Can we be friends? : unexpected animal friendships from around the world 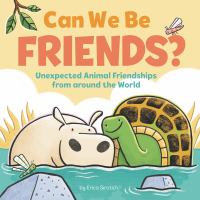 Book
This book tells about five unlikely animal friendships in sanctuaries and zoos, from around the world: Kenya's Owen the hippo and Mzee the tortoise; South Africa's Themba the elephant and Albert the sheep; California's Koko the gorilla and her kittens; Virginia's Kumbali the cheetah and Kago the dog; Ireland's Ben the dog and Duggie the wild dolphin.