Give me back my bones! 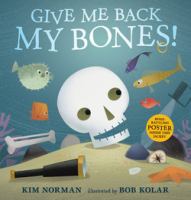 A silly pirate skeleton seeks to put its bones back together in this rhyming romp beneath the waves. Cast a spyglass 'round here while breakers curl and pound here. There's treasure to be found here - I feel it in my bones! A stormy night at sea has uncovered some long-buried secrets and surprises. Is that the mast of a shipwreck? A faded pirate hat? And what's that hiding in the sand? A mandible and a clavicle, phalanges and femurs, a tibia and a fibula - could there be a set of bones scattered across the ocean floor? And who might they belong to? A jaunty rhyme takes readers on an underwater scavenger hunt as a comical skeleton tries to put itself back together piece by piece. Make no bones about it: this rollicking read-aloud will have young ones learning anatomy without even realizing it.