There's a skeleton inside you! 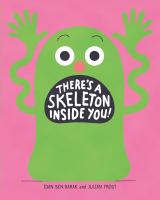 From writer Idan Ben-Barak and illustrator Julian Frost, the creators of Do Not Lick This Book, comes a hilarious, interactive picture book that takes a look inside our bodies to show what humans are made of.--