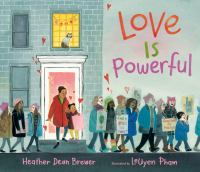 "Mari is getting ready to make a sign with crayon as the streets below her fill up with people. "What are we making, Mama?" she asks. "A message for the world," Mama says. "How will the whole world hear?" Mari wonders. "They'll hear," says Mama, "because love is powerful." Inspired by a girl who participated in the January 2017 Women's March in New York City, Heather Dean Brewer's simple and uplifting story, delightfully illustrated by LeUyen Pham, is a reminder of what young people can do to promote change and equality at a time when our country is divided by politics, race, gender, and religion."--