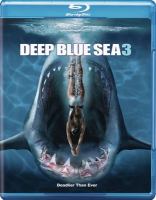 Blu-ray
Scheduled release date: August 25, 2020.
Welcome to Little Happy, a tiny man-made island in the Mozambique Channel that's home to a flourishing nursery of marine life, where Great Whites come to mate and give birth every year. This peaceful conservatory is overseen by Emma Collins and her team of environmentalists, determined to continue her late father's legacy. This idyllic existence comes to an abrupt end, however, when Emma's ex-boyfriend arrives on the hunt for three bull sharks accused of butchering a half-dozen people. Their mother Bella was genetically engineered to be smarter and far more destructive. As the body count rises it becomes clear that Bella's offspring have inherited her enhancements, and if free to mate, will mark the end of life as we know it. Dive in for the deadliest, bloodiest return to the deep blue sea yet!