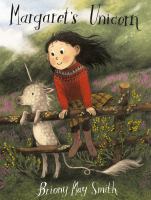 "Margaret's whole world changes when her family moves to a cottage by the sea to be near her grandma. One evening, Margaret spots a mist over the water. No, that's not mist ... clouds maybe? No, they're unicorns descending onto the shore! They vanish as quickly as they'd appeared, but accidentally leave behind a baby, tangled in the weeds. Margaret, lonely and in need of a friend, brings him home and cares for him through the fall and winter. Together, they chase the waves, stomp on frozen puddles, and build snow unicorns. When spring finally comes around, and the other unicorns return, Margaret's takes her small friend back to his family ... but these two won't forget one another. And though Margaret misses him, she has made a new friend, and her new cottage is starting to feel like home. With all the feel of a classic, here is a picture book young readers will want to revisit again and again."--Amazon.com.