If you come to Earth 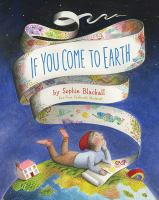 Book
In this picture book, a boy writes a letter to an imagined alien, explaining all the things he will need to know about Earth and the people who live here--and adding a postscript asking what the alien might look like.