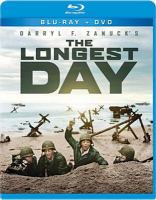 Blu-ray
The story of the Allied invasion in Normandy during World War II, detailing the D-Day landing from the points of view of those who participated.