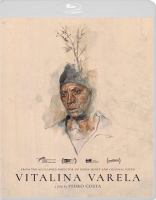 Blu-ray
Scheduled release date: September 8, 2020.
A Cape Verdean woman who has traveled to Lisbon to reunite with her husband, after two decades of separation, only to arrive mere days after his funeral. Alone in a strange forbidding land, she perseveres and begins to establish a new life. Winner of the Golden Leopard for Best Film and Best Actress at the Locarno Film Festival, as well as an official selection of the Sundance Film Festival.