I am vengeance : retaliation 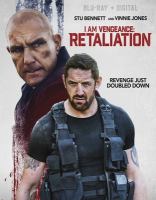 Blu-ray
Scheduled release date: August 11, 2020.
When he's given the chance to retrieve Sean Teague, the man who betrayed Gold's the team on their final mission in Eastern Europe and transport him to a military prison, Gold, who'd rather kill Teague, is reluctant. But when a government operative promises to expunge the crimes that've forced Gold into a life on the run, Gold agrees, and prepares for the fight of his life against Teague's band of mercenaries and a mysterious sniper.