Fight of the century : Alice Paul battles Woodrow Wilson for the vote 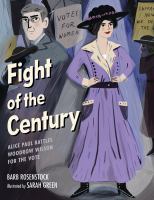 "This fight determines whether the women of the United States can vote, folks. The winner changes the country forever."--Back cover.
"When President Woodrow Wilson arrived in Washington, DC, to start his first term, women's rights leader Alice Paul was ready to demand an amendment to the Constitution that allowed women to vote. The president thought that idea was ridiculous! THEIR FIGHT BEGAN. For the next five years, Alice and her suffragists battered Wilson and his supporters with arguments and protests. Their peaceful pickets were met with ridicule and violence. Even when thrown in jail, Alice and her mighty group of women did not back down from the fight to have a say in how their country was run. With a spirit and determination that never quit, Alice Paul fought for the right for women's voices to be heard."--Jacket flap.