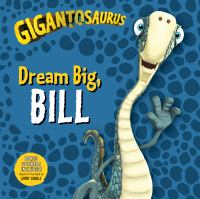 "This book is all about Bill, the little blue brachinosaurus. someday Bill will grow up to be one of the biggest dinosaurs in Cretacea, but for now he's just the biggest scaredy-saurus! So when he hears about a mystery dino who knows the secret to growing up, Bill sets out with his friends to find him... Who could it be?" -- Page [4] cover.