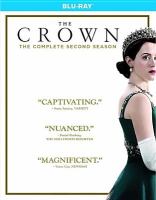 Blu-ray
The story of Queen Elizabeth II's reign of the United Kingdom, and how it helped to shaped the latter part of the twentieth century.