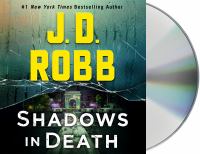 "While Eve examines a fresh body in New York's Washington Square Park, her husband, Roarke, spots an all-too-familiar face among the onlookers. He knows Lorcan Cobbe from his days on the streets of Dublin. He knows that Cobbe kills for a living--and burns with hatred for Roarke, the man he believes to be his half brother. Eve is quick to suspect that the victim's spouse--resentful over his wife's recent affair and poised to inherit her family fortune--would have happily paid a high-priced assassin to do his dirty work. Roarke is just as quick to warn her that if Cobbe is her man, she needs to be careful. Law-enforcement agencies around the world have pursued this coldhearted killer for years, to no avail ... Eve is desperate to protect Roarke. Roarke is desperate to protect Eve. And together, they're determined to find Cobbe before he finds them"--