Henry Heckelbeck and the haunted hideout 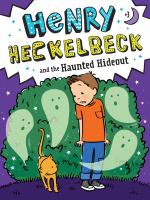 Book
"Henry is just like any other normal kid. He plays soccer. He isn't a huge fan of homework. He even has an older sister, Heidi. What's not so normal about Henry is that he's magic. Henry also needs a hideout. He needs a place to play with his best friend where his sister can't bother them. A hideout like this calls for a magic spell. But can magic make a hideout haunted?"--