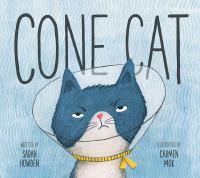 Book
"One day Jeremy the cat wakes up at the vet to find a cone has been fastened around his neck. It bends his whiskers and bungles his super-cat sense. After attempting several fruitless escape maneuvers, he dejectedly accepts his new role: he is Cone Cat now. But when by a happy accident he discovers that his cone is perfect for tipping the breakfast bowl so that the milk and cereal pours right into his mouth (and stores leftovers for later), he realizes that the cone just might be a friend after all. And as it turns out, it's useful for lots of things! Like hiding the stuffing he rips out of the couch, trapping spiders on the wall, super hearing so he knows when to hide from the little human, and-best of all-stealing an ice cream scoop at a birthday party when he realizes he can disguise his cone as one of the kid's bowls. It's his very own superpower. The next day, the humans take the cone away and, just like that, he's free! But at a cost-even though Jeremy has the freedom to return to his old tricks, he wonders if it will ever be the same as his glory days with the cone. It doesn't take him too long to find out. While chasing a fly, Jeremy knocks a potted tree in the living room and tumbles down with it, landing himself back in the cone-and in a paw cast."--