Madeline Finn and the therapy dog 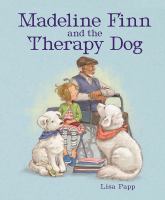 Madeline Finn hopes Star can become a therapy dog. But first he needs to pass his test. They have been practicing all the skills he needs to master. They practice meeting people. They practice sitting still when a bike goes by. They even practice meeting other dogs. Now Madeline Finn and Star are off to Walker Oaks, a retirement community where Star will take his tests. They face a variety of challenges and meet several new friends. But Madeline Finn can't stop thinking about an elderly man in a wheelchair, who never smiles. Is there something she and Star can do to help Mr. Humphrey?