Marvel Spider-Man : the art of the game 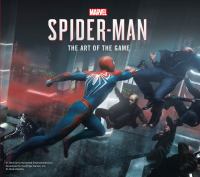 "An exclusive behind-the-scenes look at the creation of Marvel's Spider-Man. The worlds of Peter Parker and Spider-Man collide in the action-packed Marvel's Spider-Man videogame exclusively on the PS4. Marvel's Spider-Man: The Art of the Game is packed with hundreds of exclusive full-colour images of Spider-Man, his suit and equipment, the allies he relies on like MJ Watson and Aunt May, and the deadly villains he battles. This wealth of material is accompanied by exclusive insight into the creative process from the talented developers, artists, and designers responsible for bringing Spider-Man's world to vivid life" --