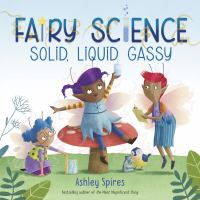 "Esther the fairy doesn't believe in magic. But fairies are all about magic, despite Esther's best efforts to reveal the science of their world. This time around, though, she's got her fairy pals Clover and Fig, along with trusty sidekick Albert the bird, to help create a more science-oriented entry for their school's "Magic Fair" -- Pixieville's magical answer to a science fair, which has never gone well for Esther before. When the local pond disappears, Esther realizes this might be the perfect opportunity for a real experiment! It's up to Esther and her fairymates to ask questions, make hypotheses, do research and show their conclusions -- this time, all about the water cycle. But when everyone Esther knows believes that Jack Frost is responsible for ice and that moon sneezes cause evaporation, she'll have to learn that sometimes discovery is its own reward. Solid, Liquid, Gassy (A Fairy Science Story) is the second book in Ashley Spires' hilarious picture book series about a charming, determined heroine who celebrates the joys of curiosity and wonder."--