Behind the bookcase : Miep Geis, Anne Frank, and the hiding place 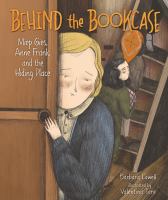 Book
"Miep Gies, who as a girl was a refugee during World War I, recognized that world had once again become a dark place. Especially in danger were Jewish people during the Nazi occupation of the Netherlands, like her boss' family"--