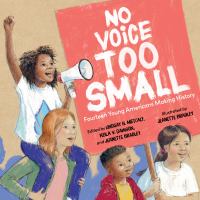 Book
Joseph Bruchac, Guadalupe Garcia McCall, and others present poems about young activists who have stepped up to make changes in their community and in the United States.