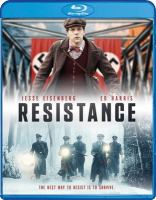 Scheduled release date: July 21, 2020.
Before he was the world-famous mime Marcel Marceau, he was Marcel Mangel, an aspiring Jewish actor who joined the French Resistance to save the lives of thousands of children orphaned at the hands of the Nazis. A compelling drama about a group of unsung heroes who put themselves in harm's way to rise above hatred and oppression during World War II.