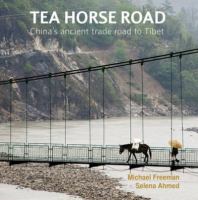 Book
"One of the longest and most dramatic trade routes of the ancient world, the Tea Horse Road carried a crucial exchange for 13 centuries between China and Tibet. China need war horses to protect its northern frontier, and Tibet could supply them. When the Tibetans discovered tea in the 7th century, it became a staple of their diet, but its origins are in southwest China, and they had to trade for it. The result was a network of trails covering more than 3,000 kilometres through forests, gorges and high passes onto the Himalayan plateaus, traversed by horse, mule and yak caravans, and human porters. It linked cultures, economies and political ambitions, and lasted until the middle of the twentieth century. Re-tracing the many branches of the Road, photographer and writer Michael Freeman spent two years compiling this remarkable visual record, from the tea mountains of southern Yunnan and Sichuan to Tibet and beyond. Collaborating on this fascinating account, ethnobotantist Selena Ahmed's description of tea and bio-cultural diversity in the region draws on her original doctoral research." -- Publisher's description.