Funeral for a friend 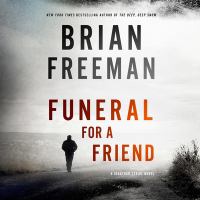 "Everyone keeps secrets. Even Jonathan Stride. Jonathan Stride's best friend, Steve Garske, makes a shocking deathbed confession: he protected Stride by covering up a murder. Hours later, the police dig up Steve's yard and find a body with a bullet hole in its skull. Stride is pretty sure he knows who it is. Seven years ago, an out-of-town reporter disappeared while investigating anonymous allegations of rape against a prominent politician. Back then, the police believed that the reporter drowned at a dangerous swimming hole called the Deeps...but the discovery of the body changes everything. Now Stride's partner, Maggie Bei, is forced to ask Stride an uncomfortable question: Did you kill him?"--from publisher.