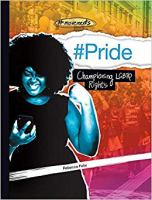 Book
Introduces readers to the pride movement, from its beginnings at the Stonewall Riots to the LGBTQ rights movement, the first pride parade, the creation of the rainbow flag, and legislation such as the Matthew Shephard Act and the 2015 Supreme Court ruling that legalized same-sex marriage.