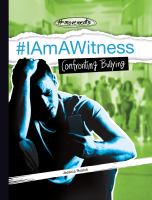 Book
Readers learn about the #IAmAWitness movement, from early research and attempts to stop bullying, Cyberbullying, and bullying's effects such as school shootings and suicides. Also examined are efforts to prevent bullying from Melania Trump's Be Best campaign and The Megan Meier and Tyler Clementi foundations.