The office : a Day at Dunder Mifflin Elementary 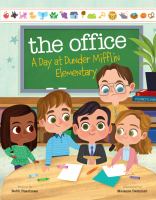 Michael Scott is Line Leader at Dunder Mifflin Elementary! It's a very big job, but Michael is sure he can live up to the "World's Best Line Leader" title printed on his water bottle. There's just one problem--Michael doesn't know how to lead the line. Filled with colorful, detailed illustrations and brimming with Easter eggs and nods to iconic moments from the show, this hilarious reimagining features a pint-sized cast. This story will introduce The Office to a whole new generation and will teach them that everyone needs to ask for help sometimes. Even Line Leaders.