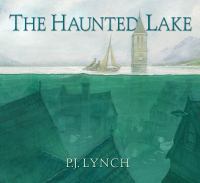 Jacob and his father are the only people who fish Lake Spetzia, which was formed when the river was dammed and their town was flooded. The villagers say the lake is haunted, but Jacob and his father don't want to leave, because Jacob's mother is buried in the cemetery below the water. As Jacob grows up, a village girl named Ellen falls in love with him, and he with her. But before they are married, Jacob disappears--lured underwater by the ghosts who inhabit the sunken village. Years go by, with Jacob held captive by the watery spirits and Ellen never giving up hope that she will find him, until a fateful night when Jacob sees the light of Ellen's boat floating above. Can he break free and reach the surface? Masterful illustrations alive with achingly expressive characters and eerie underwater light bring readers into acclaimed creator P.J. Lynch's rich world of love, loss, and hope.