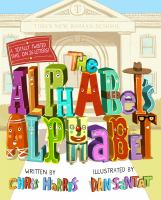 Illustrations and easy-to-read text reveal that while letters of the alphabet resemble each other, each is also unique, as if they, like human beings, are part of the same family.