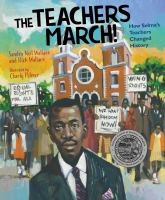 "Reverend F.D. Reese was a leader of the Voting Rights Movement in Selma, Alabama. As a teacher and principal, he recognized that his colleagues were viewed with great respect in the city. Could he convince them to risk their jobs--and perhaps their lives--by organizing a teachers-only march to the county courthouse to demand their right to vote? On January 22, 1965, the black teachers left their classrooms and did just that, with Reverend Reese leading the way. Noted nonfiction authors Sandra Neil Wallace and Rich Wallace conducted the last interviews with Reverend Reese before his death in 2018 and interviewed several teachers and their family members in order to tell this important story."--