Unicorns are the worst 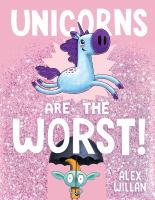 A grumpy goblin hates having unicorns as neighbors, but when dragons threaten his home and the unicorns come to the rescue, he has to admit that maybe unicorns are not so bad after all.