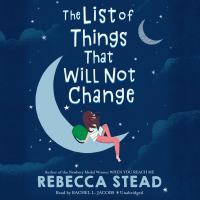 When Bea's parents got divorced, they told her about two big changes: Dad is gay. Mom and Dad will have different apartments, each with a room for Bea. They also gave her a special notebook to record the list of things that will not change. The first and most important: Mom and Dad will always love Bea and each other. They are still a family, just different. Bea's days are split between her parents; school remains the same. She still goes to Dad's family's lake house every summer. Only now, no one mentions Mom. Then, Dad announces that he and his boyfriend Jesse are getting married. Bea is thrilled. She loves Jesse, and he has a daughter her age, Sonia. Bea has never met her, but she's sure that she and Sonia will be the perfect sisters. Behind her joy, though, something she did last summer is haunting Bea.