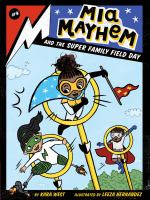 Book
Joining other students and their parents for family field day at PITS, Mia joins in potato sack races, a game of tug-of-war and a hula hoop ring toss that becomes increasingly dangerous as the region's most skilled superheroes compete to win.