That monster on the block 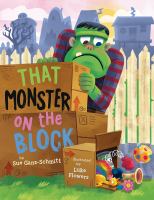 Monster is excited to see what kind of creature will move into Vampire's old house on the block. He even starts practicing his welcome growl for the new neighbor. But when the moving truck pulls up, it's not a greedy goblin, an ogre, or a dastardly dragon that steps out. Instead, it's something even more terrifying than Monster could have imagined! Monster quickly rallies the other neighbors to unite against the new guy on the block. But what if the new neighbor isn't exactly as bad as Monster thinks? Join Monster as he confronts his fears in this charming and lighthearted look at what it means to accept others who are different from us.